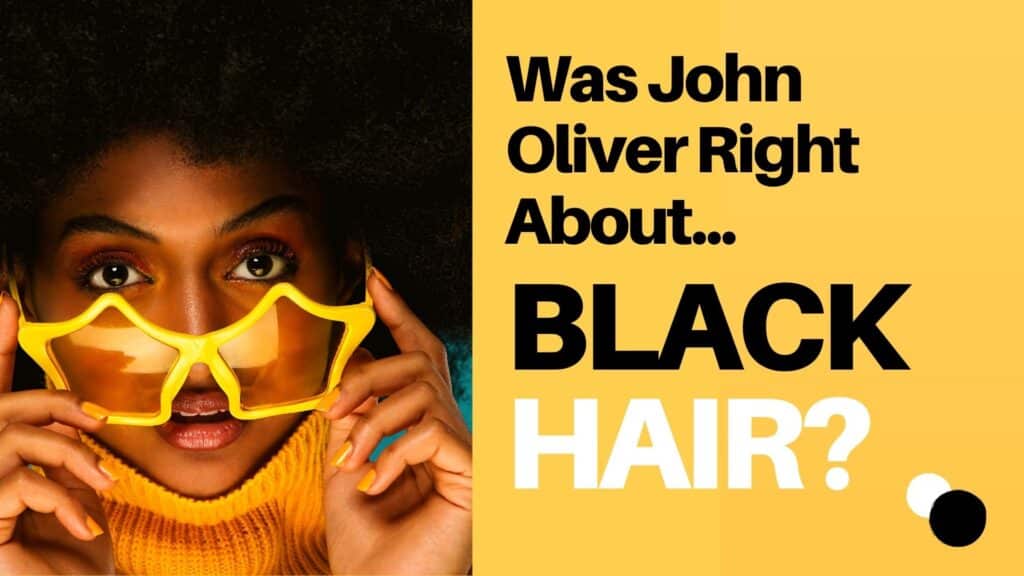 A few weeks ago, I was back home in Las Vegas about to go to bed when the John Oliver show just so happened to be on TV. Just as I was about to close my eyes to sleep, I saw that he was getting ready to do an entire segment on black hair.

I sat up immediately, paying very close attention because I was very interested in hearing what he would say about our hair. I mean, part of me was like, “Oh my gosh! Am I going to be offended?”

I didn't know what to expect because for so long black hair has been the topic of discussion in the workplace, not just from black people but also from white people or people of other ethnicities who are uncomfortable with the way we wear our hair.

Before I get into what he talked about in the video, I want to talk a bit about some of the struggles and things that we've gone through for so many years as black women when it comes to our hair. I spent nine and a half years in the United States Air Force, and in my time in the Air Force, it was always an issue with hair, not with me personally, but in general.

We had to follow Air Force Regulation 36-2903. That regulation had to be adhered to for you to remain compliant about your hair. Basically, you could not wear your hair in a “faddish” style.

The natural texture of black hair was considered a fad, so you couldn't wear your fro if you were going natural, for example. Braids were sometimes an issue, wearing a nice tapered short brush cut was an issue, and so were locs.

But in my mind, the question I always asked myself was, “What other ethnicity would be told that the natural texture of their hair is faddish?”

Okay, back to John Oliver because I want to give him and his writers credit for the research and love they put into their show concerning black hair and all the drama we have to deal with just to live in a world that completely disrespects our God-given hair at every point.

You can watch the show here.

His team did an incredible job doing the research, and they got it right. Our hair is not an ornament. Our hair is a cultural thing for us, and everyone in the world needs to understand that.

To have someone like John Oliver, who is not a black man, or a black woman, create a piece like this and nail it to me is absolutely amazing.

So thanks John, you made a difference, and I'm very thankful this issue hit your radar, and you chose to take action on it.

Today I'm taking off my wigmaker hat and putting on my Cosmetology hat with this super easy pixie cut style tutorial. My daughter was headed to a homecoming dance and wanted a different look. This was a quick and easy tousled style that anyone could recreate. Enjoy!

What is the real difference between single drawn hair and double drawn hair? In this video, I explain the differences so you can be knowledgeable the next time you have to order from a supplier to make a lace wig, or if you're purchasing wefts to wear for a sew-in.

Say it aint so! You'd have to watch the video to see for yourself.

My friend Rob Fooks performed a miracle on my hair and I can't wait for you to see it!

Today I read a disturbing article from Daily Mail about a young lady in the UK who died from a possible allergic reaction from her hair glue. In this video I explain what happened, and how we can prevent this from happening to us as clients and us as us as beauty professionals.

You can read the Daily Mail article here.

So on Tuesday I went back to the creamy crack! In all honesty I never really left, I just took a break and wore braids for a few months to give my hair a break.

I have to say I LOVE my hair short!

The young lady that did my hair was outstanding! Check out some of the footage I filmed while I was at her salon.

One of the things I was most known for in my salon was my sew-in weaves. I always had my “go to” technique for clients who wanted some of their hair left out. Because it was one of my favorite techniques, I decided to film it a few years ago, and now I'm sharing it with you!

Although this video is a throwback, this technique is still awesome and will give you great results!

This video is an oldie but goodie. In this trainign you'll learn how to round brush, how to do a roller set, how to use a flat iron properly and so much more! Get FREE training like this here.

Last night I took myself out to the movies since I'm still here in Vegas. I went to go see “Almost Christmas”, and couldn't watch the movie because I was too busy looking at Gabrielle's hair! Check out the video for more!

I remember a few years ago I frequented a salon bi-weekly. I wasn't overly impressed with the work, but the stylist got the job done.

I distinctly remember coming in excited for this particular appointment because I wanted a short hair cut.
…